I traveled over 43 hours from Chicago (which has been my home for the past four years) to Los Angeles (my new home). The train took us through sweeping plains, mountain passes, and vast deserts.

It was my first time traveling by train, other than the “L”. I was used to traveling long distances by car, or bus, or plane, but traveling by train was a whole different experience. It was, surprisingly, most like my trip via cruise ship around the caribbean last summer. The helpful crew and mealtimes lifted my travels a step up above bus travel. Having a bathroom aboard (multiple in every train car) was an improvement from car travel where frequent rest stops are common place.

Rolling along parts of the old Santa Fe trail and Route 66 made me feel as though I was in a spaghetti western. I half expected Clint Eastwood, or the like, to be gunslinging out my window. Old horse trails, where the grass still hasn’t grown back, remain like a time capsule. What once was the land of American “destiny” was now just a passing view on my trip elsewhere.

The majesty of America’s heartland and not-so wild west will be captured in a Travelogue coming soon. 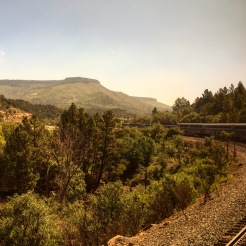